Israel puts up a good show at the World Travel Market 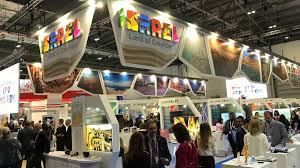 Israel puts up a good show at the World Travel Market tourism fair in London last week. It was Israel best tourism year till date.

October proved to be a record-breaking year for Israel, all thanks to almost 500,000 tourists injecting $676.3 million into the economy. This was assisted by Israel’s effort in marketing campaigns.

At the event, Israel’s pavilion was visited by many of the thousands of conference attendees.

Although Israel is not geographically located in Europe, it is member to a number of European transnational federations and frameworks, and takes part in many European sporting events, as well as the annual Eurovision song contest, which it won last year and which will be held in Tel Aviv in 2019.

Israel is taking part in WTM for more than 35 years. The Israeli pavilion at the fair covered 400 square meters and was inspired by the campaigns of the Ministry of Tourism: “Two cities one break” (Tel Aviv and Jerusalem), and the “Always Sunny” campaign of the Negev and Eilat. Booths focusing on regions in Israel included Jerusalem, Tel Aviv-Jaffa, Eilat, the Dead Sea, the Galilee, Netanya and Nazareth.

During the fair, Israel’s Ministry of Tourism held meetings with senior officials of the global tourism industry for increasing sales channels in Israel, and expanding marketing channels in England in particular and Europe in general. Amir Halevy, the director general of the Ministry of Tourism said, “We are looking forward hopefully to another record year with 4 million tourists. Now we have to work on our infrastructure.”