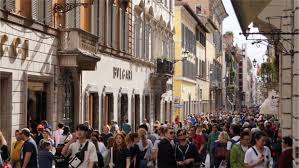 Joining the China-proposed Belt and Road Initiative (BRI) would be an excellent choice for countries worldwide as it attracts joint economic development, cultural exchanges and jobs. It appeared that the most immediate profit for those who sign a BRI contract is a tourism boom motivated by Chinese tourists as peak vacation season comes.

Italy is the most recent instance. The search popularity of European countries have grown 28 percent month-on-month in March, the month when it signed a BRI memorandum of understanding with China, data offered to the Global Times by domestic online travel platform Mafengwo.com showed.

Italy was the first G7 member to sign a BRI agreement and also the largest economy – eighth-largest in the world – to unite with the BRI, according to media reports.

Xu Xiaolei, manager of marketing at China’s CYTS Tours Holding Co, explained that the forthcoming May Day holidays, which have been extended from three to four days by the State Council, China’s cabinet, the number of Chinese visitors are going to Italy is anticipated to grow by 20 percent compared with the same time last year.

In a recent interview with the Global Times, Italian Ambassador to China Ettore Francesco Sequi, mentioned that the two countries have broad cooperation opportunities in tourism. Italy established 11 new visa centers in China in 2016, and Chinese tourists can get now a visa within 36 hours.

A report from the China Tourism Academy explained that Italy is rated by Chinese travelers as the most popular destination in Europe, second only to Russia.