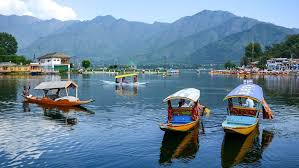 North Indian state Jammu and Kashmir’s tourism may take a hit even around the upcoming festive season running from Durga Puja to Diwali, with several tourists diverting their travel plans to places such as Himachal Pradesh, Ladakh and the Northeast states.

The political disorder in Jammu and Kashmir has not only cut short the travel plans of pilgrims and tourists currently visiting the state, but also thrown a spanner into upcoming travel plans for the long Independence Day weekend.

According to Tourism Kashmir Director Nissar Wani, about 20,000-22,000 tourists were in Kashmir on Friday when the Jammu and Kashmir (J&K) administration issued an advisory asking Amarnath Yatris to cut short their pilgrimage and all tourists to leave Kashmir Valley at the earliest, citing terror threats.

As per reports, only a little over 1600 tourists remained in Kashmir on Saturday, as buses and even Indian Air Force aircraft were deployed in the wake of the advisory to ferry tourists out of Srinagar.

The countries such as the UK, Australia and Germany have also updated their travel advisories for India over the weekend. To help the stranded tourists, the Indian Railways reportedly decided to waive cancellation fees for reserved journeys to and from Jammu Railway Station, Katra Railway Station and Uddhampur stations till Tuesday morning.

Some airlines, too, pitched in to regulate fares as the sudden tourist exodus from Srinagar over the weekend caused a spike of at least 20-25 per cent in airfares. “Air India has further reduced the fare from Rs 9,500. It is holding maximum fare at Rs 6,715 for Srinagar-Delhi route and at Rs 6,899 Delhi-Srinagar route till 15th August,” the national carrier’s spokesperson said on Sunday.

Similarly, low-cost carrier IndiGo, the country’s largest airline by market share, announced that it is implementing a distance-wise cap on the fares for flights coming out of Srinagar airport till August 10. For instance, airfares would be capped at Rs 6,000 for flights travelling up to a distance of 500 km from Srinagar airport while the cap for travel of more than 1,300 km is at Rs 15,000 per passenger.

Meanwhile, people are also rushing to cancel Kashmir travel plans over the Independence Day weekend. Kashmir’s tourism is taking a huge hit even around the festive season running from Durga Puja to Diwali, with several tourists diverting their travel plans to places such as Himachal Pradesh, Ladakh and the Northeast states.

In fact, according to the tourism industry insiders, 30 per cent of the tourists planning a visit during Diwali holidays have already put on bookings on hold. That does not bode well for a state where tourism is the biggest employement generator, and where the footfalls had just managed to recover post the deadly Pulwama attack in February and the ensuing border tensions.

There are from 25,095 tourists to the Kashmir Valley in January, the number plummetted nearly 37 per cent the following month. But things had been on the mend ever since. March saw 21,237 tourists before growing close to threefold to 61,815 in April. In June and July over 150,000 tourists had visited Kashmir. Various sectors such as handicrafts, transport associated with the tourism industry will also suffer huge losses. There are lakhs of people directly or indirectly associated with tourism and handicrafts sector,” Kashmir Chamber of Commerce and Industries (KCCI) President Sheikh Ashiq said in a press statement. He added that the sudden exodus of the tourists and the yatris will have a “far-reaching impact on Kashmir’s economy” and a breakdown of the economy may be “imminent”.