Japan and Singapore passport named as most powerful in the world 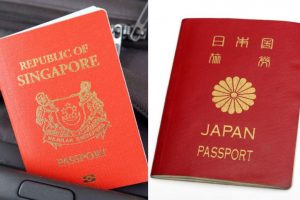 Singapore and Japan took the top spot in the world’s strongest passport ranking, both offering access to 190 destination without the need of a visa in advance.

Based on the data from the International Air Transport Association (IATA) and the firm’s research department , Henley & Partners, a residence and citizenship planning company complied the Henley Passport Index.

Travel documents is being rated in the quarterly index considering how many countries they allow to access, either visa-free or by only needing to get a visa on arrival ( rather than in advance).

Finland, Germany, and South Korea remain in second place with a score of 188 while Denmark, Italy, and Luxembourg were in third place and  citizens now able to access 187 destinations worldwide without requiring a visa in advance.

Since the last quarter the UAE’s position in the rankings, the Middle Eastern nation climbed five places and 46 places over the past decade. This was due to the recently gaining access to a slew of African countries that included South Africa.

With a visa-free/visa-on-arrival score of 172 it took the 15th place.

Over the last decade the former Soviet states have also vastly improved, : Ukraine and Moldova have both climbed 19 places while Georgia jumped to the 16th place.

According to Henley & Partners the index was about more than just hassle-free travel.

Dr Christian H Kaelin, chairman of Henley & Partners and the creator of the passport index said that the ongoing research has shown that when they talk about ‘passport power’, they were discussing more than simply the destinations a holder can travel to without acquiring a visa in advance.