Jet Airways will no longer provide inflight entertainment on all routes 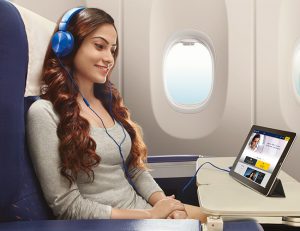 Jet Airways  has cut inflight  entertainment on all flights and a recent note on the company’s website mentioned that from April 1, 209 their inflight entertainment service JetScreen will be  unavailable on domestic and international flights.

Journey from London Heathrow to Mumbai and New Delhi is included in this which takes take nine hours 10 minutes and eight hours 40 minutes respectively.

As per recent reports India’s oldest private airline is in debt to the tune of almost £1bn. There will cuts to inflight meals, lounge access, revision of change and cancellation fees on domestic flights.

Currently only 26 aircraft are operative out of the 123  as it has defaulted on loan payments  and did not pay staff  and pilot’s salary.

All services between Manchester and Mumbai has been cancelled in recent weeks , although the route was introduces in November 2018.

The flights were grounded last Friday as the , the state-owned Indian Oil Corporation refused to refuel the carrier’s aircraft for a number of hours.

A syndicate of banks, led by the State Bank of India has given prospective bidders just two days to submit an expression of interest and commit to a 75 per cent stake in the ailing company considering the urgency of crisis.The interested parties should come forward  until 6 pm on Wednesday 10 April.

Even though in the last quarter, the airline flew just more than seven million passengers but lost £80 m.