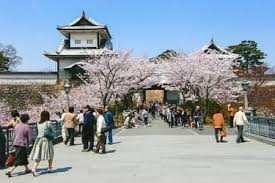 A roadshow targeted at the trade, has been arranged by the Japan National Tourist Office or JNTO and the Kanazawa Hotel Association.

With mere two stops in Europe, Milan and Paris, Kanazawa is on a mission to endorse this small jewel of authentic Japan based in between Tokyo and Kyoto, and equidistant both by the deluxe high-speed train Shinkannsen (2 1/2 hours) or by plane (about 1 hour).

Many officials welcomed by the Consul General of Japan, consisted of representatives of 7 hotels (Kanazawa New Grand Hotel, Ana Holiday Inn Kanazawa Sky, Hotel Kanazawa, Kanazawa Kokusai Hotel, Kanazawa Tokyu Hotel, Ana Crowne Plaza Kanazawa, and Hotel Nikko Kanazawa), each with an ability of around 100 to 200 rooms, and of the city’s Convention Bureau.

The group, guided by Shoichi Shoda, President of the Tourist Association of Kanazawa, a city compared to the city of Milan, said, “Because we are very rich in history and culture, religious and kind, come and you will discover that we are your second homeland.”
A Creative City of UNESCO ever since 2009, Kanazawa is the capital of Ishikawa, one of the 47 Japanese prefectures, situated at the center of the country in between the mountain scenery and the coast of the Sea of Japan. The Italians who visited this place last year were almost 11,770 (increased as never before this spring), up 102% over the previous year in comparison to 25 million total visitors, of which only 529,000 were foreigners.

The seminar has disclosed a culture that is not very common in books and the Internet, refined in modesty and rich in a 400-year history that protects in its appearance, challenging new things at the same time with the Museum of Contemporary Art of the 21st century of Kanazawa as an example, or with its railway station, whose architecture is elected one of the most beautiful in the world.