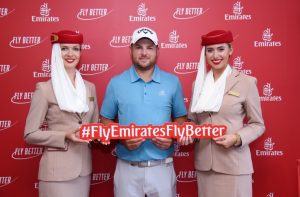 Over 60,000 fans attended the final round of Dubai’s biggest golf event, which has been supported by Emirates for 10 years. As the Official Airline, Emirates engaged with fans across all ages at the season-ending tournament.

The airline activated its world-class hospitality, offering VIP guests a preview of its newest destination, Mexico City, which will launch on 9 December. Guests enjoyed stunning views of the 18th hole and indulged in gourmet meals at the hospitality chalet. Visitors also had the chance to mingle and take photos with top rated players who visited the chalet including Aaron Gai, Andrea Pavan and Jordan Smith. The airline also engaged with young golf fans on-ground at the Children’s Area where visitors mingled with “Fly With Me” mascots and cabin crew offered branded polaroid frames to take home as mementos.