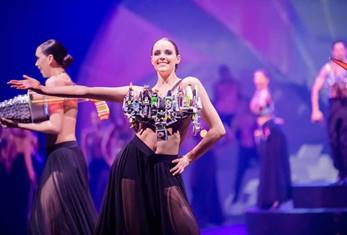 The top prize of the unique event, part international design competition and part multi-million-dollar theatrical spectacle, was awarded to a New Zealand entry that commemorates the centenary of the armistice that ended the First World War in 1918.

WOW founder and head judge Dame Suzie Moncrieff said WAR sTOrY was “a garment that the judges described as an exceptional example of powerful storytelling realised through a work of art.”

It was a “compelling realisation of a thought-provoking narrative that is flawless in its execution.”

“We wanted to include as many tangible memories, using recycled materials that have been either collected over the years, traded or salvaged to help imbue this art piece with memories for past, current and future generations,” English explained.

English and Meharry took the supreme awards home for the second time after convincing the judges in 2013 with their garment titled The Exchange, a complex meditation on colonial and Maori shared cultural influence.

Another stand out was David Kirkpatrick’s garment Uplifting that took out the Bizarre Bra category. Using his mechanical engineering background, the New Zealander created the impressive undergarment, inspired by the GE X jet engine and 787 wing designs. Kirkpatrick used a small home 3D printer and fibreglass to create the bra, transforming his garage into his workspace.

“It was challenging creating a large garment using a small home 3D printer, and combining old and new technologies together by using computer design, but then finishing it by hand,” he said.

Launched in 1987 by Moncrieff in Nelson on the country’s South Island, WOW wanted to take art off the wall and onto the moving body. It has long been the world’s leading wearable art design competition and its spectacular stage show attracts an audience of around 60,000 people during its two-week season.

The theatrical extravaganza, which kicked off on Friday in Wellington sees models and dancers turn the garments into performance art, set in a series of six worlds inspired by the competition themes.

This year’s themes are Under the Microscope, Reflective Surfaces and the crowd-favourite, Bizarre Bra, along with the recurring Avant-garde, Aotearoa and Open sections.

The anniversary show is full of historical hat tips. Starting with footage from the first wearable art show, which integrated music and dance in order to promote Moncrieff’s rural art gallery in Nelson, it strides through magical wonderlands, mind-boggling light shows and Pacific beats. It lauds Kate Sheppard, leader and figurehead of the suffragist movement in New Zealand which became the first country to grant women the vote 125 years ago. And it commemorates the centenary of the end of the Great War.

But most of all it’s a fabulous, slick show that celebrates the creativity from designers from all over the world who dare to think outside the box.

This year entries from 44 countries and regions vied for a coveted spot onstage and one of the 39 awards. A record 17 countries and regions reached the finals, showcasing designs by professionals from the fashion, art, design, costume and theatre industries alongside students and first-time enthusiasts.

By the end of this year’s season WOW will have showcased more than 4,800 finalist garments on its stage and has long earned itself an impressive reputation.

“Athletes have the Olympics, actors have the Oscars, musicians have the Grammys, designers and costume creators have WOW,” Bob Haven, Professor in Costume Technology at Kentucky University sums it up.

Runner Up: Supreme WOW Award Winner: Under the Microscope Section

Third: Under the Microscope Section

Under the Skin by Louise Byford (London, United Kingdom)