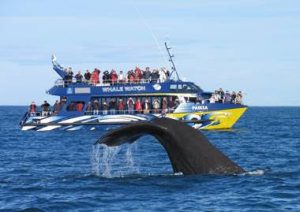 In February 2014, the Kaikoura community was awarded the EarthCheck Platinum Certificate for Environmental Performance – the first community in the Southern Hemisphere to achieve this.

Kaikoura has been collecting environmental information since 1999 and, in 2002, became the first local authority in the world to achieve Green Globe accreditation. In 2010, Kaikoura was awarded EarthCheck Gold. EarthCheck / EC3 Global, which operates in 70-plus countries, is the world’s leading environmental benchmarking and certification programme for the travel and tourism industry.

Kaikoura (in the Canterbury region, north of Christchurch) is one of New Zealand’s top nature tourism destinations. This is based on year-round whale-watching and spectacular scenery – a peninsula of wild rugged coastline, between the Pacific Ocean and the snow-capped peaks of the Seaward Kaikoura Ranges, rising to 2600m and forming a dramatic background for the marine life that is often seen close to shore.

Resident sperm whales are the main attraction, but there are at least another eight whale varieties regularly seen including the humpback and blue whale. Other native populations include New Zealand fur seal, rare Hector’s and Dusky dolphins, Royal albatross and a huge variety of seabird species.

Multi award-winning tourism operator Whale Watch Kaikoura each year takes around 100,000 visitors out on to the Pacific Ocean to view (with 95% success rate) the giant sperm whales that frequent this rich marine environment.

Whale Watch Kaikoura is dedicated to providing a quality whale watching experience while respecting and carefully managing the use of a rare natural resource. The experience is enriched with stories of the local people, their traditions and their history. The company works actively to reduce its carbon footprint.

Whale Watch is a local community trust that belongs to the Māori people of Kaikoura, who operate in partnership with their tribal people. This is also the story of how a community in need found a new impetus within itself.

Founded in 1987, Whale Watch has been a key factor in turning around the town’s declining economy. Operating as a charitable entity, Whale Watch returns a significant portion of profits into the community for education and employment, and to protect the environment. The community’s major employer, it has inspired other successful tourism and service businesses that have sprung up in the wake of the whale watching operation.

Commitment to the environment

But the story doesn’t stop with Whale Watch. Many Kaikoura operators have a green thread through their operations, caring for the environment which brings tourists from all over the world. Other notable eco-tourism businesses include: