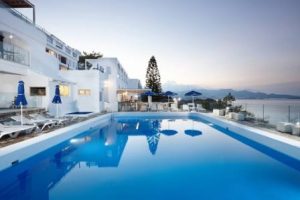 The Perspective Magazine Awards recognizes companies and individuals for their achievements within the vacation ownership industry over the past year and is considered one of the highest honours within the industry. The 2019 Perspective Awards were judged independently by a group of industry experts combined with online votes from industry peers and presented during an awards lunch party sponsored by Holiday Systems International and INTUITION during the GNEX 2019 Conference.

Named the Best Hotel/Resort Development in Europe, Karma Minoan, situated on a stretch of coastline in Crete, Greece is one of the resort group’s newest properties. Recently renovated, Karma Minoan boasts 23 spacious one and two bedroom condos with balconies that face the turquoise waters of the Mediterranean.

Karma Kandara, a resort that was built on a cliff high above the Indian Ocean at the tip of Bali’s southern peninsula won for Best Exterior Design and Interior Design. With its jaw-dropping views and its perfect mix of combining local Balinese architecture and modern design, Karma Kandara guests are transported to paradise.

Karma’s trailblazing Founder and Chairman, John Spence has been once again awarded Entrepreneur of the Year, having previously taken this honour four times, including last year. In 2018, Spence trained for and completed the Marathon de Medoc for charity; a full marathon through the wine region of Bordeaux combining running with over 20 wine tasting stops.  This tremendous feat, along with Karma’s countless other philanthropic efforts earned Spence this achievement. In 2015, John also captured the award for Industry Best Veteran.

Finally, two shining stars at Karma’s India sales office were awarded. At only 23-years-old, Nihan Rebello earned the Best Newcomer Award, and Suleman Ahmad won the award for Best Sales Professional for closing no less than 75 deals between October 2017 and September 2018 in revenue in excess of $2.1 million.

“It is a tremendous honour to be recognised at the Perspective Magazine Awards and comes as a result of a lot of very hard work done by the Karma Team,” said John Spence, Chairman and Founder of Karma Group. “For us, work has got to be taken seriously and earn money, but it’s also got to be like sport – fun, challenging and something we do for enjoyment. It’s a balance. I genuinely feel that our work is an adventure every day, where we constantly push boundaries and strive for excellence for our many loyal clients.”