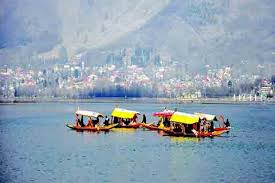 The  casual labourers of Tourism Department of Jammu and Kashmir held a protest demonstration today demanding release of their pending wages.

Scores of labourers under the banner of Kashmir Tourism Department Casual Labourers Union assembled outside Director Tourism office and raised slogans in support of their demand and said that their wages are pending from four years.

They said that their wages are being withheld since 2014 and have not been released till date due to which they have to face immense hardships. “Our wages have not been released since July 2014. Despite order issued from the Secretariat about releasing of the wages but till date not a single penny was released. We are 342 labours working with the tourism department,” a protesting labour said.

The protesters appealed to the concerned department to release the wages and threatened that if the wages are not released immediately, they will be forced to come on roads.