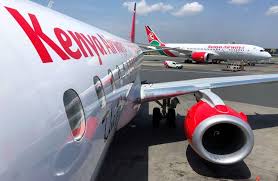 Kilavuka has been heading the national airline in an acting capacity since December 16 following the resignation of the ex-chief Sebastian Mickosz.

The incoming CEO will be tasked with turning the loss-making airline back to profitability.

The airline has been making losses for at least five years now; it expanded its loss before tax to Sh8.56 billion in its half-year results in 2018/2019.

“It is particularly gratifying to me that the board agreed to support the appointment of Allan to the full role of substantive CEO. During his short time as acting CEO of KQ, Allan has thrown all his energy into this role, whilst still maintaining his position of CEO of Jambojet,” Kenya Airways chairman Michael Joseph said in a statement dated Thursday.

Kilavuka, who also doubles as Jambojet’s CEO, will join the boards of all subsidiary companies and will remain on the board of Jambojet initially as CEO until March 31 and thereafter as a representative of Kenya Airways.

He takes over from Mickosz who withdrew from his leadership position last year before the end of his three-year contract which was to expire in June 2020.