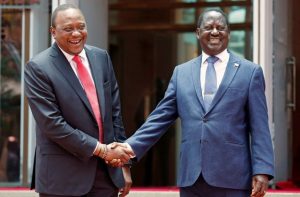 The political stability in Kenya sent the tourism numbers hurtling to 2.02 million. The stability is largely attributed to the handshake between President Uhuru & ODM leader and AU envoy Raila Odinga in March 2018. For the first time Kenya tourism numbers crossed that of two million.

CS Najib Balala said that the tourism numbers were low in 2017 due to insecurity and political instability. He said: “Tourism will never grow if there are no three important things – peace and security, infrastructure and mature politics.”

According to Raila Odinga, Kenyan institutions must change tack. He said the country earned Sh157 billion from tourism last year up from Sh119 billion in 2017, which is a 31.26 per cent growth.

He said that they need Mombasa port and the airport to accommodate bigger ships and more airlines so that more tourists can visit Kenya. He acknowledged bureaucratic red-tape and corruption at airports.