Kerala to venture into cruise tourism with five vessels 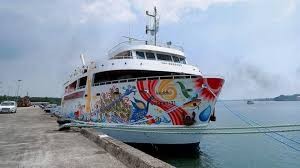 Kerala Shipping and Inland Navigation Corporation Limited (KSINC) is all set to pioneer cruise tourism in southern India, with a solar-powered vessel and another one capable of global voyages ready for roll out after its flagship vessel, Nefertiti, takes the plunge later this month from Kochi.

Nefertiti, that cost ₹16.42 crores and named after a beautiful Egyptian queen, can host parties, official conferences etc., on board and carry 200 passengers up to 36 km into the sea.

Two other partially air-conditioned vessels, which can be used as tourism vessels-cum-ferries will be launched later this year in Kochi and Kozhikode. All this will make KSINC a forerunner among government-owned firms in the country’s cruise-tourism sector.

The above mentioned five vessels would give a new dimension to tourism in Kerala, with active participation of the State’s tourism stakeholders, said A.P.M. Mohammed Hanish, MD, KSINC. The corporation’s Sagara Rani I and II are the only sea-going tourist vessels in Kerala. ‘‘We now intend to make a major presence in the sector, by venturing into hitherto unexplored territory. ‘Plan funds’ are available for the five vessels, which include Andromeda, a ₹60 crores ship capable of undertaking global cruises from Kochi,’’ he said.

‘‘Construction has begun in a Sri Lankan boat yard to build a solar-powered cruise vessel costing approximately ₹4 crore. The vessel that is yet to be named is expected to be ready by August 2019 and is expected to take guests 9 km into the sea from Kozhikode beach. It will be able to carry 80 people in the lower deck and 20 in the upper deck. The design is such that the catamaran-type vessel with twin engines will be stable even if all 100 passengers are in the upper deck,” said Anoop Kumar, technical manager, KSINC.

The agency’s tourist-cum-ferry vessel, Cleopatra, which can carry a total of 130 passengers, has already arrived in Kochi from Goa. Its sister vessel Michelle will arrive within a fortnight. Each one has a price tag of ₹2.40 crore and will have a top speed of approximately 12 knots (22 km per hour), which make them the fastest such vessels in Kerala, Mr. Kumar said.

Despite plans being drawn up to operate them in Kozhikode, one of them might be anchored in Ernakulam where KSINC is headquartered, to operate in the Vaikom-Ernakulam or Vyttila-Fort Kochi sectors.