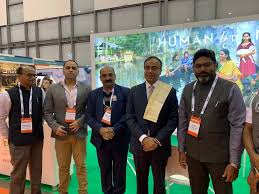 As part of a plan to make inroads into the Mediterranean region and forge strong bonds with the Israeli tourism sector, Kerala Tourism showcased its strengths at the two-day International Mediterranean Tourism Market (IMTM) at Tel Aviv in Israel, the Kerala Tourism Minister said on Friday.

IMTM is the only professional exhibition for the tourism trade market in Israel.
Indian Ambassador to Israel Sanjeev Kumar Singla visited the Kerala stall at the fair, which is considered a trendsetter for the global and local tourism industry.

A trade delegation along with top officials of the Kerala Tourism Department held meetings with their counterparts at the IMTM besides meeting airlines officials.

State Tourism Minister Kadakampally Surendran said that Kerala Tourism had taken part in the IMTM in 2019 for the first time.

“We participated in this year’s IMTM to send a strong message to tourists in Israel and other countries in the Mediterranean region that Kerala has all the trappings of a tourist hotspot,” the Minister said.

The direct flight from Tel Aviv, the second most populous city in Israel, to Kochi, which began in September last year, has also considerably helped in increasing footfalls from that country.

Kerala boasts of a strong connection with Israel and has the oldest Jewish settlement In India.

The first Jewish settlers were sailors and traders who reached South India during 900-500 BC and settled around the ancient trade centre and port-town of Muziris, called Shingly by the Jews. The second wave of Jewish settlers came in as migrants in the early 16th century following the Spanish and Portuguese inquisitions and made their base in Kochi.