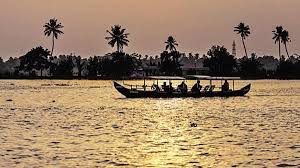 Thiruvananthapuram: Kerala has regained the pre-floods tourist footfalls, registering an impressive growth rate of 14.81 per cent in the second quarter of the current year.

There was an increase of 6,39,271 tourists (both domestic and foreign) during April-June this year as compared to the figure during the corresponding period in the previous year.

Particularly satisfying for Kerala Tourism was the fact that it bucked the negative trend in foreign tourist arrivals in the aftermath of last year’s devastating floods, attracting 1,82,320 visitors from abroad in the second quarter of the ongoing year, a growth rate of 8.74 per cent as compared to the same period in the previous year. The total number of arrivals from abroad was 1,67,666 during April-June 2018.

Of the 14 districts in Kerala, Ernakulam registered the highest increase in footfalls with an increase of 1.71 lakh, followed by Idukki with 1.35 lakh.

Except Kollam and Thrissur, all the other districts showed positive growth rates in tourist arrivals.

As for domestic tourists, the number went up by 6,24,617 when compared with the figures of corresponding period in the previous year, an increase of 15.05 per cent, the release said.

After a span of nearly 10 months (May 2018-March 2019 except December 2018), the arrival of international tourists registered a positive growth rate.

Overall, there was an increase of 14,654 tourists during April-June 2019 when compared with the figure of 1,67,666 registered during the corresponding period a year earlier.

Tourism Secretary Rani George said the domestic tourist footfalls in Kerala were back to normal by the end of 2018 itself, but the international arrivals showed negative trends till the end of first quarter (January-March) of 2019.

Tourism Director P Bala Kiran said Kerala Tourism has been adding a range of innovative products to attract tourists from far and wide.

“We have now laid emphasis on adventure tourism and monsoon tourism, and it has started yielding heartening results,” he added.

In fact, 11 of the 14 districts registered positive growth rate in foreign tourist arrivals during April-June this year as compared to the figures of the corresponding period a year earlier.

Ernakulam district witnessed the highest increase in arrival of foreigners with a figure of 87,058, followed by Idukki with 12,409.