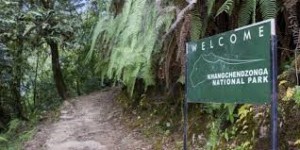 The Khangchendzonga National Park (KNP) in Sikkim is popular among trekking and hiking enthusiasts. It is the starting point for several stunning trails, taking explorers up and through a dizzying variety of forests and terrains to sites offering breathtaking views of Mt. Khangchendzonga, the world’s third highest peak.

But KNP, unlike other national parks, is quite special. The park represents a protected core area ensconced within the massive Khangchendzonga Biosphere Reserve (KBR), in the eastern Himalayas. The park not only offers a glimpse of the astounding biodiversity, from rare orchids to the endangered red panda, it also showcases how nature and human beings flourish side by side in complete harmony.

This park is located at an altitude of 1784 square kms. In 2016, it was recognized for its tangible as well as intangible heritage as a UNESCO Mixed Heritage Site – the first such site in India designated both for cultural and natural significance.

Now, after two years, the biosphere reserve, bordering Nepal to the west and Tibet (China) on the north, has been brought under UNESCO’s World Network of Biosphere Reserves (WNBR), of the Man and the Biosphere Programme (MAB), and this has brought happiness to the state of Sikkim, already celebrated for its conservation, ecotourism and organic farming policies.

Tashi Wangdi, the director and member secretary, Indian National MAB Committee of the Ministry of Environment, Forest and Climate Change, said, “In the biosphere reserve, we have core, buffer and transition zones. The KNP is the core area in the KBR. It is a legal identity and under the Wildlife Protection Act. But the buffer and transition zones go hundreds of kilometres beyond the core area and that is where the challenge lies.”