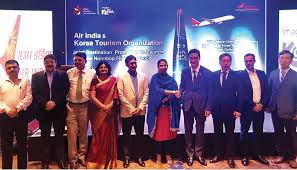 Korea Tourism Organization (KTO) and Air India has collaborated to declare the launch of the new nonstop flight connection from Delhi to Seoul of late. More than 100 trade and media participants took part in the event, which was addressed by Jong Ho Choi, Minister of Embassy of Republic of Korea in India and Meenakshi Malik, Commercial Director, Air India.

The recent updates of the destination were presented by KTO and the in-flight facilities, baggage advantages and competitive prices were introduced by Air India to travel trade partners.

This first joint effort between KTO and Air India is all set to encourage more travelers coming from India to South Korea with Air India as their preferred airline.

The flight provides several benefits over its competitors flying in the same sector. From Delhi to Seoul, it will be the shortest duration flight with 6 hrs flying time and maximum baggage allowance of two pieces, which is 46 kgs for economy passengers.

Last year, about 119,791 Indian tourists visited South Korea and 150,457 South Korean tourist visited India. The more and more exchange of tourists between the two countries has boosted both the organizations to partner and promote the destination and the new flight connection.

Talking about South Korea as a tourist destination, Malilk said “I went to Korea and I was amazed to see the development of the country especially from a digital point of view. In terms of cargo as well, there is a huge potential, especially with Make in India and Digital India. There are not enough Indians visiting South Korea as compared to other Asian countries. We are happy to be the promoter of increased connectivity between the two countries.”