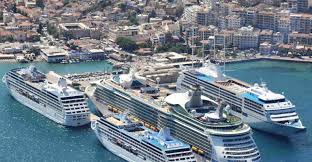 With cruise companies chalking out their routes to Turkey once again, the Kuşadası region of the Aegean province of Aydın, where every year, the highest number of cruise ships is anchored has witnessed one of its best tourism seasons ever.

Kuşadası Ege Port General Manager, Aziz Güngör explained that a total of 194 ships dropped anchor near Kuşadası. They were carrying 180,000 visitors to the region in 2019.

Güngör said “the dark clouds have disappeared” for Turkish cruise tourism with cruise ships adding Turkey back in their travel itineraries after it got idle in 2016 with ships calling off calls in the country’s ports.

He added further that there has been a growth of 30% in the number of ships anchoring in Turkey in last year, and the number of passengers increased by 40 % in comparison to the year before.

Noting that the true revival is hoped o take place in 2020, Güngör said they predict a 60% growth in the number of ships and to double the arrival of tourists.

“We expect 310 cruise ships and 360,000 tourists to arrive at Kuşadası Port in 2020.” He observed that cruise ships keeps on docking at the port even in winters adding that for the region, it was the first time to receive tourists in the off-season.

“In January, nine cruises ships have brought 10,000 tourists. It was the first time for Kuşadası to experience such a long cruise season.”

Göngör explained that they hope to see more cruise ships traveling to Turkey during winter months.