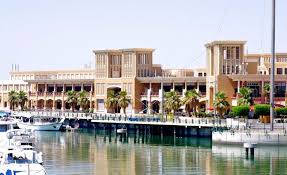 As part of its plan to transform the country into an international business and financial hub, the State of Kuwait is aiming to develop its tourism sector in line with the ‘New Kuwait’ or ‘Vision 2035’. The strategic plan for tourism will have development of Kuwaiti Islands and the northern region of the country to attract visitors from around the world. Among the most important ventures is to develop the locally well-known Island of Failaka and re-introduce it regionally as well as internationally.

In 1982, a tourism resort was opened on Failaka to invite visitors to observe and appreciate the relics and areas dating back to thousands of years. Various Kuwaiti families also inhabited the Island. The current plan focuses on re-energizing the tourism scene in the Island and to place it on the map of the must-see touristic locations in Kuwait.

Back to the mainland, Souq Al-Mubarakiya is famous for being one of the oldest existing markets in the country, attracting visitors from far and wide. The old architecture of the souk is one of the principal reasons why people continuously visit the market. High-end shopping malls like the Avenues, the 360 mall, the Gate, Al-Kout, and others will also satisfy the need of visitors and tourists.

On the coastline, several important landmarks like the Kuwait Towers, the Grand Mosque and the Green Island greet visitors to the country along with Marina and Sharq Malls and various restaurant franchises. Also on the coastline is the Kuwait scientific center, opened on April 7, 2000, with its numerous facilities, dining options and entrainment services for all age groups. People loving cultural spots should visit locations like the Red Fort in Jahra governorate, Seif Palace and Kuwait National Museum in Kuwait city, Al-Othman Museum in Hawalli, the Historical, Vintage, and Classical Cars Museum in Shuwaikh Industrial area or the Tareq Rajab Museum of Islamic Calligraphy in Al-Jabriya.

For outdoor experiences, people from Kuwait, the region, and the world cn have a great time at Al-Shaheed Park — home for greeneries, fountains, breathtaking sculptures, and above all a spectacular view of Kuwait city during the evening.