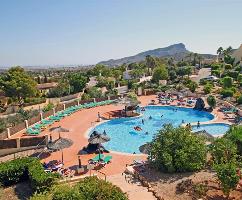 La Manga Club’s new owners have made an impressive start to their tenure of Spain’s flagship resort after helping the acclaimed sports and leisure destination raise more than €20,000 for under-privileged children in South America.

Leading figures from Hesperia Investment Group’s management team joined a host of VIPs, top sports stars and resort residents at the climax to the venue’s annual Alda Foundation Charity Week,  which raised a total of €20,250 to help educate poor youngsters in Paraguay.

The finale to this year’s fundraising week saw the new owners take their place in an audience of around 200 people – including the likes of ex-world number nine tennis ace Nicolas Almagro, the resort’s new tennis academy director, and the Mayor of Cartagena – for a disco-themed summer party at La Manga Club’s five-star Hotel Principe Felipe.

Featuring live music and entertainment, cocktails, sumptuous buffet, a charity auction and open bar, the event provided a memorable conclusion to a packed week of charity activities that began with a fun tennis tournament for all the family at the resort’s 28-court tennis centre.

Budding football stars of the future between the ages of 7 and 16 had the chance to show off the full array of their skills the following day at the Alda Football Tournament (costs €35 per child) before the action switched to La Manga Club’s famous fairways on Wednesday, July 31 for a charity golf competition on its award-winning South Course – venue for five Spanish Opens.