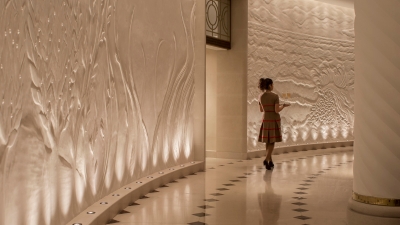 Widely respected in today’s contemporary art scene and acclaimed as one of the most outstanding photographers of his generation, Procter was also one of Karl Lagerfeld’s most trusted documentary photographers, having been granted unprecedented backstage access at the Chanel shows. For more than a decade, Procter’s daring camerawork captured the energy and essence of the Chanel shows, visually recreating the epic sets. From a luscious forest scene to a rocket launch, Procter combines multiple photographs to illustrate in a single image the many perspectives of the intense but fleeting spectacle. Procter also captured images of Lagerfeld preparing models backstage, a privilege afforded to few, offering a unique glimpse into the inner sanctum of the fashion house.

Bringing the book to life, the large-scale photographs will line the circular perimeter of the Hotel’s Rotunda Bar and Lounge, and the exhibition will include some never-before-seen artworks. Guests will be offered an unparalleled look into the wide-ranging creativity of one of history’s most respected and iconic designers, making it essential viewing for all lovers of fashion and admirers of Chanel and Lagerfeld’s incomparable legacy.

In addition to the works showcased in Rotunda, limited edition artworks will be available to view and purchase in an adjacent gallery for the duration of the exhibition, with prices starting from GBP 5,500. The Lagerfeld: The Chanel Shows books will also be available for purchase in the gallery, including a limited number of copies signed by Simon Procter.

Running until June 30, 2020, visitors can also enjoy The Runway Afternoon Tea inspired by Lagerfeld: The Chanel Shows by Simon Procter and a cocktail crafted by Director of Mixology Harry Nikolaou in celebration of the exhibition.