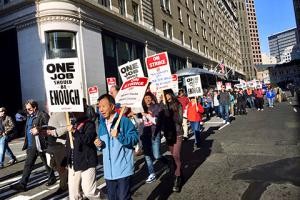 About 8,000 Marriott hotel employees across eight U.S. cities are striking under the slogan ‘One job should be enough’. The workers demand better wages and workplace safety. These workers are being represented by the union – Unite Here.

According to Marriott International and Unite Here, about twenty-four hotels have been affected including in Boston, San Francisco, Honolulu, Kauai, Detroit, San Diego, Oakland and San Jose.

The striking employees are demanding living wages in a rapidly growing economy. A worker opined that she did not have children because the wages were not enough.

The striking workers want to take part in the decisions involving technology. They complained of out-dated equipment and excessive workload.

A small group walked in a circle in front of the Greek columns of the Westin Book Cadillac hotel. They blew whistles and beat bass drums chanting slogans such as ‘Dirty beds, dirty sheets, take your business down the street’.

Workers in Detroit said that they received U.S. dollar two to U.S. dollar five an hour which is much less than that in the other towns.

A housekeeper Jowenna Ellazar said that they have to skip lunch and sacrifice their bodies and health in order to finish their work.

Unite Here said that the strike is indefinite until demands are met.

Marriott International released a statement to the Guardian that said that they are disappointed that Unite Here resorted to a strike. They however, respect associates’ rights to voice their opinions and participate in the demonstrations.

Marriott International will keep their hotels open during the strike and serve the guests. They are ready to negotiate and work with any associate who wants to continue working.

According to Marick Masters, director of Labor@Wayne, there could be more movement from unions. He believes that workers are suffering from declining or stagnant wages for many years and now they want to extract a fair price for their services.

Marriott is the largest hotel company in the world recording earnings of U.S. dollars 3.2 billion for 2017.

High-profile conferences and galas have moved away from the striking properties including a CityLab conference in Detroit, and the Communications Network conference in San Francisco.

D Taylor, international president of Unite Here says that Marriott strikers are raising the standards for all North American workers.

The striking workers of Marriott hotel in the U.S. want better wages so that they do not have to take up more than one job to make ends meet.