Last Chance To Give Your View on Waverley Masterplan 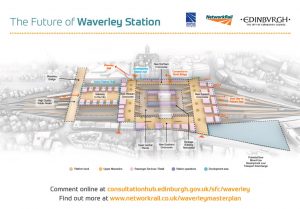 Those interested in helping shape the future of Edinburgh Waverley have one day left to submit their views on the station’s Masterplan.

A month-long exhibition located on Waverley’s concourse will end tomorrow, Friday April 26, and so too will the public’s opportunity to give their views on this phase of the Masterplan’s development.

Led by Network Rail and City of Edinburgh Council, the Waverley Masterplan exercise is considering future growth at the station, the impact of other city centre developments, urban planning trends and how the station can be enhanced to support the future success of Scotland’s capital city.

A team of experienced engineers, architects and urban planners, led by Edinburgh-based consultants Arup, have analysed the usage patterns of the existing station and have proposed various ideas aimed at ensuring this great station can cope in the longer term.

Requirements include boosting passenger space to avoid crowding and congestion, improving accessibility from the Old Town, Waverley Bridge and Princes Street whilst also seeking to deliver a modern, vibrant station for passengers, Edinburgh and Scotland.

Following the end of the public exhibition on Friday, feedback will be considered and incorporated into further work that will ultimately inform a revised Masterplan which will be published in September this year.

The plan will present a vision for the future of the station and will be used to explore future development via phased investment over the next 30 years.

Alex Hynes, Managing Director of the ScotRail Alliance, which includes Network Rail Scotland, said: “Waverley has seen its footfall more than double from 10 million to over 24 million within the last ten years and the latest estimates suggest that it will more than double again, to 49 million, by 2048. Such a steep increase is a positive indicator of the railway’s economic influence on the city and Scotland but also a clear sign that further investment will be required.

“The work of the Masterplan team so far suggests that some ambitious improvements to the layout of the station will be required to enable Waverley to meet the future needs of the railway, the city and the country. Before a completed Waverley Masterplan is published, we are keen to listen to the views of our customers and stakeholders.”