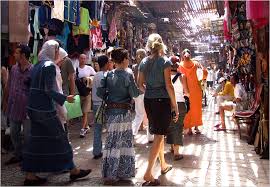 In 2018, Morocco welcomed 12.3 million tourists, up 8 percent from the year before, said Adil El Fakir, general director of the Moroccan National Tourist Office (ONMT), on Tuesday.

While delivering a speech at a presentation in Casablanca on Moroccan tourism achievements, El Fakir explained that tourist arrivals in Morocco totaled 11.3 million in the initial 11 months of last year, an average of one million tourists every month and a rise of 8.5 percent in comparison to 2017.

In tourism arrivals, between 2000 and 2018, Morocco has averaged an annual growth of 6 percent, which is two points higher than global tourism development, he added.

The statistics, as per El Fakir, made Morocco the top African tourist destination and the 30th most popular globally.

In Morocco, Chinese tourist arrivals increased remarkably in just three years after the ease in visa requirements. Their arrivals grew tenfold from 10,000 in 2015 to almost 180,000 in 2018, as per the ONMT general director.

From January to November 2018, Marrakech, the top Moroccan tourist destination, experienced 2.4 million tourist arrivals in addition to 2.6 million scheduled hotel stays till the end of last year, according to Morocco’s Tourism Observatory.

Also, the coastal city of Essaouira received 15 percent more tourists in the initial 10 months of last year than in the same period in 2017.