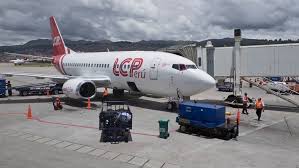 A viral video has captured the terrifying moment a plane in Lima, Peru, was forced to land Sunday night without front wheels.

The video, which was shared on social media, shows the LC Peru plane skidding across the tarmac with the nose on the ground and sparks shooting out from under it.

Flight 1323 was meant to land at the city of Ayacucho, but was forced to make an emergency landing in Lima, where the flight originally took off, after the pilot detected a problem in the air. The pilot was forced to make a “hard landing” or “belly landing” after the landing wheels did not deploy while the plane was approaching the tarmac. Fortunately, none of the 59 passengers or five crew members were injured. The airliner, LC Peru, shared a statement, the authorities appreciate the excellent maneuver of our pilot who managed to control the situation in an admirable way.

The airport was closed for several hours and flights had to be diverted while crews worked to remove the plane from the runway. The airport’s operators, Lima Airport Partners, said in a statement that they are investigating the incident.