Lew Wolff to develop a hotel tower in Bay Area 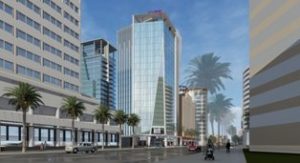 Lew Wolff, a legendary developer with decades of success in downtown San Jose, is planning to develop a hotel tower in the urban center of the Bay Area’s largest city of San Jose. An investment group headed by Wolff is preparing to purchase a site at the northeast corner of North Almaden Boulevard and West Santa Clara Street, a vacant parcel where a high-rise hotel has been proposed.

The buying group is a venture that is headed by Hawkins Way Capital, whose principals are Karan Suri and Ross Walker, as well as Wolff, who is an investor in the enterprise. The seller would be a venture headed by developer KT Urban, which has proposed a 272-room hotel that would rise 19 stories. The property’s official address is 8 N. Almaden Blvd. If the deal proceeds as anticipated, the purchase would be completed sometime in September, Wolff estimated.

A typical Moxy is described by Marriott as a “millennial-friendly” hotel that’s “designed for the young and the young at heart.” Marriott also says that “Moxy reinvents the traditional hotel stay and aims to surprise travelers with a playful, spirited and fun guest experience.”

Wolff is a key figure behind some of downtown San Jose’s most iconic properties and buildings. The groups and companies led by Wolff have, at various times, owned the Fairmont Hotel; the Westin San Jose, commonly known as the Hotel Sainte Claire; and a lot on West San Fernando Street where Adobe is building a new office tower to dramatically expand its downtown San Jose headquarters campus.

Perhaps the most ambitious project ever developed by Wolff is a mixed-use office, restaurant, and retail complex in the heart of the downtown that was known as Park Center Plaza when Wolff developed it in the 1970s at a site bounded by West San Fernando Street, South Almaden Boulevard, Park Avenue and Market Street. In later years, and under new owners, the complex was renamed Cityview Plaza.

In 2018, in a deal that underscores Wolff’s acumen in choosing that location for the original complex, another stalwart development firm, Jay Paul Co., paid $283.5 million for the property. Jay Paul swiftly floated plans to completely transform the site as a modern tech campus where potentially 17,000 to 22,000 people might someday work.

Wolff also is busy in downtown Oakland. A Wolff-headed venture has launched construction of a high-rise hotel with up to 286 rooms that would sprout at 1431 Jefferson St. That 18-story hotel would contain two Marriott brands, a Marriott Residence Inn and an AC Hotel, according to Wolff.

A group being advised by Wolff bought the Oakland property in March and moved swiftly to launch construction within four months after the transaction was complete. That quick launch could bode well for Wolff’s new downtown San Jose hotel venture.

The downtown Oakland hotel project, Wolff said, is located in an opportunity zone, one of numerous areas around the country where certain investments can occur with tax advantages, including deferral, or even elimination, of capital gains taxes, a benefit enabled by President Donald Trump’s tax cut program of 2017.

Downtown San Jose is another major area that’s home to an opportunity zone. Wolff’s investors in the downtown Oakland hotel pressed him to scout the South Bay city for a fresh investment.

Wolff’s new hotel venture in downtown San Jose is close to an under-construction Adobe office tower that would dramatically expand the headquarters campus of the cloud services titan.

Plus, a few blocks away, Google has proposed the development of a transit-oriented community of office buildings, restaurants, shops, and homes where 25,000 could work, including 15,000 to 20,000 of the search giant’s employees.

“My investment partners in Oakland wanted me to find something in downtown San Jose,” Wolff said. Hawkins Way Capital and Wolff also teamed up on the Oakland hotel project.

The return of Lew Wolff to downtown San Jose in such a major way was welcomed by a veteran of the Bay Area real estate sector, Mark Ritchie, president of Ritchie Commercial.