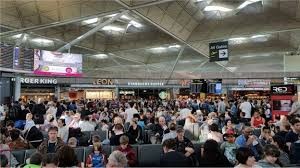 Due to the overnight thunderstorms and lightning strikes thousands of passengers travelling flying to and from the Stansted Airport had their travel plan wrecked.  It lead to the first wave of flights starting just before 6am to get delayed.

This is for the second time in two months. Flights to Barcelona, Rhodes, Budapest, Dublin and Rome were grounded.Delays of four hours or more was faced by several passengers and one Jet2 flight to Tenerife ran 10 hours late.

Ryanir faced major problems as it is the biggest operator at Stansted and it is its main base.

There was no room on stands at Stansted and the inbound aircraft were ordered to divert. Some of the flights landed at other airports which included  Luton, Southend and the East Midlands.

The return legs of the aircraft were diverted and by 9 am Ryanair started cancelling flights. Further departures to Bratislava, Cork, Dublin and Pisa were grounded.

The inbound aircraft diverted to Luton and returned empty to Spain which left 200 passengers stranded at Stansted. Several joined queues extending to the International Arrivals.Some of the passengers yelled it an absolute nightmare, there were flight cancellation without information and they told to collect bags in huge queue.

Cancellations increased steadily because of the delays  and Ryanir services to Rome, Athens and Budapest was cancelled. Over 12,000 passengers faced flak as more than 70 departures and arrivals got grounded.

A spokesperson for Ryanair regretted about the  number of flights being cancelled at Stansted Airport due to an earlier airport fueling system failure which was caused by a lightning strike.

The customers were apologized for the disruptions which was beyond the airlines control.

Stansted Airport authority mentioned in a statement that due to an earlier lightning strike, the aircraft fuelling system was unavailable for a period this morning. But engineers are on site and have now restored the system.

Chances are flights may still be subject to diversion, delay or cancellation and apologised for the inconvenience further advising all passengers to check with their airlines for their latest flight updates.