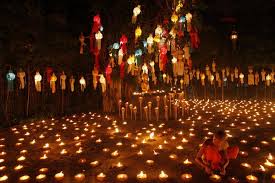 Various activities took place today to commemorate Loi Krathong Day which includes procession to invite the royal inauguration flame and lanterns, royal float, Loi Krathong Festival processions of nine districts, and a procession of Nang Nopphamat and floating the royal lanterns by the Chairman of the Ceremony to mark the auspicious occasion, at the pond of Wat Sa Si (Traphang Trakuan).

Loy Krathong is one of the most important days in the Thai calendar, occurring on the full moon day of the 12th lunar month, during the ‘high water’ season when water overflows the banks of rivers and canals.

During the annual Thai festival, people floating krathong – traditionally on rivers, but now also on any body of water. Krathong are floating ornamental objects, traditionally made from banana leaves and flowers, on which candles, incense and other small items are placed to be given as an offering to the river goddess Phra Mae Khongkha in the hope of bringing good fortune.