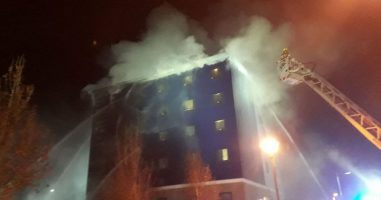 A fire broke out in the London-based hotel Travelodge in the early hours of the Wednesday morning.

Around 160 people were rescued from the hotel in the West London. No casualty was reported though. Initially, fifteen fire engines reached the High Street in Brentford when a fire caught in a bin room next to the building.

Firefighters started out with a systematic search of the hotel and fought the fire internally which helped stop the fire spreading further. London Fire Brigade reached the spot just before 3 am. As per local people, few parts of the building was covered in smoke. 100 firefighters were engaged in dousing the flames later.

Soon after the alarm in the hotel went off at 2.45 am, the guests were quickly evacuated.

The fire was huge as the flames were 20 metres high. It went up quickly.

Buses were brought to the site to relocate guests to another Travelodge Hotel in Hounslow but there was not enough room for everyone.

The blaze was brought under control by 6.53 am. The cops are trying to find out the cause of the fire.

The Fire Brigade’s control room received 17 calls about the fire.

Last year, London’s five star Mandarin Oriental hotel was also caught in a fire. Dozens of guests and staff were rescued from the hotel as over 100 firefighters were dispatched to the site to control the blaze.

At one time, guests had to climb several floors down external fire escapes getting away from thick black smoke billowing above them.

The fire incident occurred only a week after the completion of the restoration of the property.

Nearby clubs, shops and restaurants were also cleared after London Fire Brigade officers feared the fire could spread in nearby buildings.