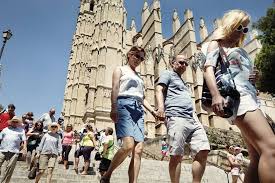 The celebratory announcement was made by City leaders and Los Angeles Tourism & Convention Board president Ernest Wooden. They used a hologram created by Los Angeles-based VNTANA, the leading provider of premium mixed reality experiences during a special gathering of LA’s tourism and hospitality community.

Mayor Eric Garcetti said that Los Anglese is a place where everyone is welcome and their tourism strengthens their diversity, helps in economic growth and supports good-paying jobs for families across the city.

The latest milestone in their ongoing work to bring Los Angeles to the world and the world to Los Angeles by surpassing 50 million annual visitors two years before the schedule.

In 2018 UK remains LA’s fifth overseas market showing an increase of three percent. The inbound international travel recorded as an all-time high showing a continued growth in demand for LA as destination for both business and leisure travellers.

Even though there was a slight decreases in 2017 there was a four percent increase in visitation from Mexico in 2018 having a total of 1.8 million visitors.

There were 1.2 million visitors fromm China, recording an all-time high showing 6.8 per cent increase , this was the largest net gain among all international markets. This made Los Angeles the number one ranked US city for the Chinese.

In 2018 other international markets like Canada, UK, Japan, Scandinavia and India  recorded their highest visitation total ever.