Loveland hotels had highest hotel occupancy rate in Colorado in 2018 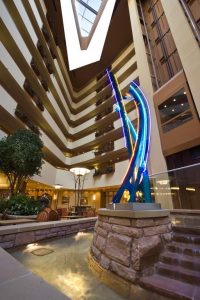 City of Loveland’s hotels recorded the highest average occupancy rate in the state for the entire year of 2018 as per the Rocky Mountain Lodging Report. Loveland ended the year with a 12-month average occupancy rate of 75.7 percent. Greeley, which averaged 74.2 percent over the year held the second position. In third place there is Denver, with 73.7 percent of its hotels rooms being filled throughout 2018.

In December, the ski-resort towns took the single-month lead, with Breckenridge recording 71.8 percent occupancy, Steamboat Springs 67.3 percent and Aspen 66.8 percent, according to the report from the Colorado Hotel and Lodging Association. Loveland’s occupancy rate in December was 59.6 percent.

The city’s occupancy numbers will be diluted early this year when the 101-room Courtyard by Marriott in Centerra and the 102-room TownPlace Suites by Marriott downtown both open, but those additional rooms will be bringing in more tax money for the Community Marketing Commission’s coffers.