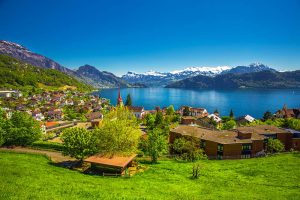 Lucerne, one of the most popular destinations in Switzerland is reviewing its tourism strategy. It will introduce coach fees in order to curb traffic woes and other disruptions caused by the influx of tourists.

The vast majority of visitors to Lucerne, whose tally surpasses 9 million a year (or the equivalent of 25,000 per day), do not spend the night in the central Swiss city. Groups of Asian tourists in particular often arrive by coach for a whirlwind tour of key sights before heading off to their next destination. The city executive is studying a proposed fee of CHF120 ($120) for each coach that stops in the city centre. The objective behind the coach tax is reducing disruptions and getting tourists to contribute to infrastructure costs.

Since 2015, the coaches trying to reach the major tourist sites at rush hour have been restricted to dropping off visitors and leaving immediately. Other measures include a popular initiative that calls for an underground parking for coaches in the north of the city that would be connected to the centre by metro.

The authorities, however, oppose the proposal for cost reasons and deem the project to be unrealistic. A study mandated by the municipality calls instead for a designated parking space in the west end, near the football stadium and a local train station.

The city plans to issue a new tourism strategy. it will involve collecting residents’ grievances from the end of 2019, considering infrastructure needs and imposing definitive rules on parking for coaches.