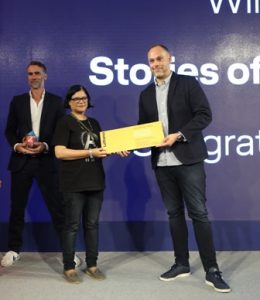 Lufthansa Marketing VP Alexander Schlaubitz, celebrity chef Kunal Kapur, and conservation biologist Krithi Karanth and IT consultant-turned-music teacher Somnath Halder discuss evolution of travel in the digital-first age and the eternal human desire to explore newer horizons. Alexander Schlaubitz, VP Marketing, Lufthansa, an experienced traveller who had lived in countries straddling half of the world’s habitable continents by the age of 18, attended the event as a keynote speaker.

In an engaging panel discussion comprising Alexander Schlaubitz, celebrity chef and restaurateur Kunal Kapur, NatGeo Explorer and conservation biologist Krithi Karanth and protagonist of Lufthansa’s recent marketing campaign #LifeChangingPlaces, Somnath Halder uncovered nuances of new-age travel and the eternal human quest for exploration. Together, the panellists spoke on topics such as “Intuition vs Search Engines”, moments of truth that all travelers eventually come across, and the interaction of the self with new places and cultures.

Somnath’s inspirational story – as an IT consultant who rekindled his passion for music after a trip to New York – took centre stage to highlight how opening oneself to newer experiences can change people’s lives for the better. After delivering a musical performance with his students, Somnath spoke with Michael Knapp (Director B2C Marketing Asia Pacific, Lufthansa Group) to discuss how discovering the world can motivate people to rediscover themselves.

“Travel has the potential to change people, to help them uncover a version of themselves that they didn’t know existed. I have felt its transformative power in my own interactions with the people, cultures, and rhythms of the cities that I have lived in and travelled to. Our latest brand initiative, #LifeChangingPlaces, captures this essence and the association with National Geographic Traveller India takes it a step further,” said Alexander Schlaubitz. “We have received a tremendous response to the launch of #LifeChangingPlaces in India, with an overall exposure/views of around 1.7 billion for the campaign assets, and a social media engagement rate that is more than thrice of the industry average. This clearly shows how receptive Indian audiences are to an evolved concept like #LifeChangingPlaces. We wanted to further build on this conversation through unique engagement avenues. The innovative format of National Geographic Traveller Meet-ups creates an intimate environment. It’s conducive in absorbing discussions while also reaching out live to millions of individuals through social media and online channels, was suitable for our purpose.”

This Meet-up was attended physically by a diverse mix of influencers, photographers, travellers, writers, and industry professionals and was live-streamed to a pan-India audience through various online and social media channels. With almost 1.36 million impressions on Facebook and more than 549,000 impressions on Twitter during the live-stream, the event was also quite well received by the country’s travel enthusiasts.

“By co-hosting the National Geographic Traveller Meet-up, we wanted to ignite engrossing conversations with people who have been inspired on their travels. We are overwhelmed with the reception that we have received and are eagerly looking forward to continuing the dialogue with Indian travelers,” Alexander Schlaubitz added.

To draw more life-changing travel stories from the audience at the event, Lufthansa also organized an on-the-spot contest called ‘Stories of the World’. Attendees wrote about the places that inspired change in them, shared their most impactful travel experiences and pinned it to a large on-site world map. A raffle was conducted at the end of the event, with Ruchi Bhatia winning a ticket to any Lufthansa destination to pursue her own life-changing experience.

George Ettiyil, Senior Director Sales South Asia, Lufthansa Group, also present at the event said, “Lufthansa has had the honor of accompanying the journey of the Indian traveller for over 6 decades and the aspirations of today’s young and global Indian is reshaping travel trends across the nation and beyond more than ever before. For many, travel experiences need to be unique and meaningfully transformative. In our endeavour to meet these aspirations today’s event in association with National Geographic Traveller India is intended as an open invitation to explore potentially life-changing destinations across the globe together with us.”