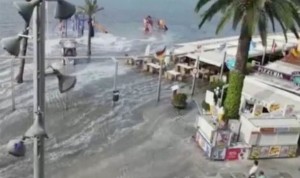 The Spanish islands of Majorca and Menorca was hit by a ‘mini tsunami’ that resulted in floods.

Meteotsumani ( a weather phenomenon) caused a 5ft wave and beaches, restaurants and roads were hit by high sea waters wave on Monday morning.

The flooding affected the Ciutadella located on the west coast of Menorca and Alcudia in the north of Majorca. The footage posted online revealed that water rushed across roads and boat owners were putting efforts to control their vessels out at sea.

So far no injuries have been reported. Meteotsunami is also known as rissaga and is caused by disturbances in air pressure following fast-moving weather events like severe thunderstorms.

It has been noted that the large waves can reach a height of 6ft and are usually smaller than tsunamis which is a resulted by seismic activity.