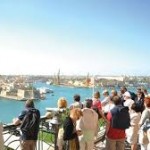 According to data published by the National Statistics Office (NSO) on Thursday in 2017 nearly2.3 million tourists visited Malta which was 15.7 percent higher than 2016.

Malta’s Tourism Minister Konrad Mizzi said 2017 had exceeded all expectations during this year, the government would be focusing on improving the country’s main tourist areas, the minister said while addressing the conference.