Man Jumps From Cruise Ship, Gets Banned For Life 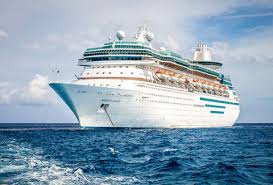 A man jumped from the 11th deck of the world’s largest cruise ship and was banned from the cruise line for life.

While in the Bahamas on January 12, the man, Nick Naydev, 27, from Vancouver, Washington, uploaded a video to Instagram of him jumping from Royal Caribbean’s Symphony of the Seas

Royal Caribbean condemned the stunt and said it was considering legal action. A spokesperson said: “This was stupid and reckless behavior, and he and his companions have been banned from ever sailing with us again. We are exploring legal action.”

Mr Naydev had a friend shoot the jump when the ship was docked in Nassau, Bahamas. Since posted, it has gathered over 160,000 views and more than 2,800 comments.

In the video, friends watch as he stands on the ledge of what appears to be a cabin balcony before jumping more than 100ft into the water below.

According to Mr Naydev’s Instagram comments, he was brought to shore by a small boat and he and his companions were kicked off the cruise ship and had to make their own way home from the Bahamas. Royal Caribbean offered no further comment on this.

He also wrote that he was still drunk from the previous night when he jumped.

Symphony of the Seas has 18 decks with a total height of 238ft and space for 5,518 passengers.

Following the news , Andy Harmer, director of Cruise Lines International Association (CLIA UK and Ireland) offered reassurance to passengers that cruising remains “one of the safest forms of travel”.

“Cruise ships today are the safest that ever sailed, thanks to the rules, regulations and technological innovations that govern their design,” he said.