After the massive bushfire in Australia, Chinese tourists cancel trips! 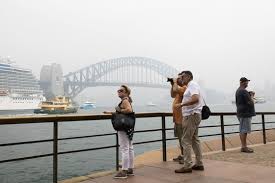 The largest tourism market of Australia is dismissing as the smoke blanketing Sydney and Melbourne and innumerous pictures of fire wrecked beach resorts discourage the tourists pouring in during the Chinese New Year, in an additional blow to the economy of the country. Every year, visitors from mainland China spend about A$12 billion ($8.3 billion) Down Under, with trips starting from January and February estimating for about a quarter of the annual arrivals. Tourism operators in Australia claims that the fire-ravaged broadcast worldwide has a chance to create a long a standing effect on foreign arrivals, the nation’s third-largest export earner.

To quote Cheryl Zhong of Equity Travel in Sydney, “The media coverage made Australia look like a third world country with thousands of refugee fleeing and village after village burnt to the ground. People even asked if most of the koalas were killed in the fire and there’s no marsupials left to see.” She is quite worried about the outlook from March, cautioning that if the opinion of the international tourists that the whole of Australia is under fire damage is not altered, bookings will drop by more than 30%. Zhong explains that Australia at present not considered a safe place with clean air and water, which is very crucial for Chinese visitors who are often seeking a break from their own crowded and polluted cities.

Zhong’s comments were almost repeated by David Tang, Sales and Marketing Director of Grand City Tours in Melbourne, who hopes a 15%-20%, decline in Chinese visitors this Lunar New Year. “The global media coverage of fires in the countryside and smoke in the cities encouraged some people to delay or decide not to visit us this year,” he said. “We’ll definitely be down this year compared with last year.”