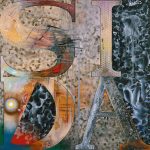 The early works of Maria Fernanda Cardoso and Rosalie Gascoigne reveal how everyday readymade materials can be transformed into extraordinary poetic assemblages and sculptures. Juan Davila’s Love (1988) painting is a prescient commentary on the AIDS crisis as a global phenomenon, whilst his also acquired massive Yawar Fiesta (1998) explores the impact of colonial policies on indigenous peoples through satiric intertwining of contemporary politics and art historical references including European history painting, Latin American modernism, American pop and Aboriginal art.

Also included in this round of acquisitions are Blue Reflex (1966), an early painting by Ian Burn, considered one of the key voices in the development of conceptual art in Australia, and Kangaroo Blank, a 1988 painting by Imants Tillers, whose work from the 1980s, along with that of Davila, is part of an international dialogue about appropriation and postmodernism in painting.

To date – halfway through the five-year program – twenty works by twelve artists and artist partnerships have been acquired for the Collections of Tate and MCA, a grouping of artworks which reveal and convey something of the complexities of Australian society, as well as the richness of contemporary art practice across the country.

The acquisitions are by artists from a range of cultural backgrounds, including prominent Aboriginal artists Vernon Ah Kee, Richard Bell, Gordon Bennett and Judy Watson. These, along with works by artists such as Juan Davila, Peter Kennedy and John Hughes, Helen Johnson and Imants Tillers, pose difficult questions about Australian history and society, or in the case of Susan Norrie’s video work Transit (2011), focus our attention on international events and their impact upon the ways we think about the world.

Just as significantly, the first three years of the program saw acquisitions across a variety of media, from video through to painting and printmaking, reflecting the expanded material basis of contemporary art.

MCA Director Elizabeth Ann Macgregor OBE, comments: “The acquired works are part of an international artistic dialogue, as are the artists – some having been born, lived for significant periods of time, or worked and exhibited extensively outside of Australia. They connect with related experiences represented by other artists internationally, highlighting both the particularities of Australian society and culture, as well as its interconnectedness with global forces.”

Maria Balshaw, Director of Tate, says: “The variety and quality of each year’s joint acquisitions show how successful partnerships like this can be. Working with the MCA has enabled us to learn from their expertise as well as to build on our own. With the support of Qantas, we are beginning to transform the way Tate can represent the exciting contributions made to contemporary art in this region.”

Qantas Group Chief Customer Officer, Vanessa Hudson, concludes: “As Australia’s national carrier, we are extremely proud to support this unique acquisition program that helps showcase the best of Australian art to the world and which also contributes to reshaping the understanding about contemporary Australian art internationally.”