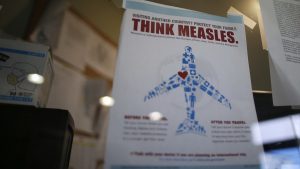 A passenger who was on a flight from Brussels on Christmas Eve was suffering from measles. Chances are the people at Newark Liberty International Airport might have contracted the disease. The flight came into Terminal B.

New Jersey Department of Health is warning people who were at the airport on Dec. 24 between 12 p.m. and 4 p.m., they could have been exposed. The symptoms would surface as late as Jan. 14.

In a press release, the Department of Health said that the individual was having infections on Dec. 24 and could have traveled to other parts of the airport apart from Terminal B.

New Jersey residents identified as potentially exposed will be notified by their local health department.

Health commissioner Dr. Shereef Elnahal said that two doses of measles vaccine are about 97 percent effective in preventing measles, and he urges all residents across the state to get vaccinated to protect their health.

The symptoms of measles include rashes, high fever, cough, runny nose and red, watery eyes. It can lead to pneumonia or swelling in the brain. Measles spreads through the air by coughing, sneezing and coming into contact with the mucus or saliva of someone who is infected.