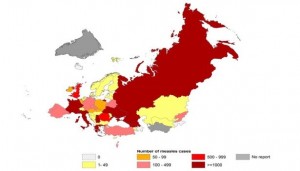 Measles, which is a highly infectious disease, now sweeping Europe and has reached an eight-year high, with more than 41,000 cases reported in the first six months of the year. The tourists travelling to Europe this summer, particularly for festivals where there will be lots of people in close contact, are at most risk.

This measles outbreak far-exceeds the end of year totals from every other year this decade and at least 37 people are believed to have died from the disease, which can be almost entirely prevented with vaccination. The seven countries, including France, Italy and Greece have had more than 1,000 infections this year and all have reported at least one death.

Ukraine has reported the largest number of cases with more than 23,000 children and adults infected, although Serbia has seen 14 measles-related deaths, the highest in Europe.

Dr Zsuzsanna Jakab, WHO regional director for Europe said that following the decade’s lowest number of cases, in 2016.

Dr Jakab said all countries should immediately launch efforts to detect and quarantine infections, adding that good health for all starts with immunization, and as long as this disease is not eliminated they are failing to live up to our Sustainable Development Goal commitments. In England, 828 cases have been confirmed up to 13 August, more than three times higher than the 2017 total. After the WHO warning, Public Health England says that anyone who hasn’t completed both doses of their measles, mumps and rubella (MMR) vaccination should contact their GP to ensure they’re protected. Since 2010 the highest number of cases reported in a single year in Europe was 33,197, in 2011, while 2016 saw the lowest number of cases with 5,273.

Public Health England head of immunisation, Dr Mary Ramsay, said that they would encourage people to ensure they are up to date with their MMR vaccine before travelling to countries with ongoing measles outbreaks, heading to large gatherings such as festivals, or before starting university.

Monthly country reports show that at least 37 people have died due to measles so far this year.