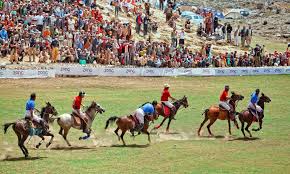 In Shandur, on July 7th, the three-day polo festival will start in Chitral, the world’s highest polo ground.

“The festival will be organised from July 7 to 9. For a couple of years, the annual three-day event could not be held on the old dates due to Ramazan,” Muhammad Tariq, secretary Sports, Tourism, Archaeology, Museums, Culture and Youth Affairs, told a meeting here.

Secretary Muhammad Tariq explained that the polo game had got international reputation and each year thousands of visitors and tourists worldwide pour in Chitral to witness this grand event. He stated that the two polo teams from Chitral and Gilgit-Baltistan would partake in the Game of Kings. In addition to other arrangements, he stated that the department would simultaneously organize transport service from Chitral to Shandur to make the process easy for the visitors.

“The local cultures including music and Chitral and Gilgit-Baltistan’s performing art would be displayed besides setting up stalls and a tent village for providing boarding and lodging facilities for both foreign and domestic tourists,” he added.

The official further explained that PIA would introduce special flights from July 5 to 12 to Chitral. He explained that there were many other programs to display the work of local artisans and cultural nights during the three-day festival.