Mechanical issue leads to emergency landing of plane in Denver 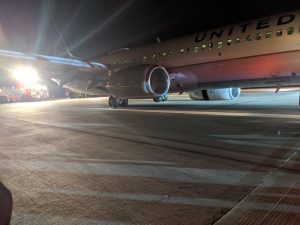 According to the flight crew, United Airlines flight 2429 which was flying from Newark in New Jersey to the Colorado City made an emergency landing due to issue with the plane.

So far, no one was injured in the incident and the cause of the Boeing 737-800 aircraft rough landing was still not known.

Some of the Twitter user Laland Starr shared picture of the jet which revealed that one of its engines was resting on the tarmac suggesting that there was a problem with the landing gear.

A spokesperson said that United flight 2429 from Newark, New Jersey to Denver experienced a mechanical issue upon landing.All customers were bussed to the terminal where their customer service teams assisted them. The maintenance teams is now inspecting the aircraft and this was not the first time a plane made a bumpy landing.

An incident occurred last month where the nose of a Turkish Airlines plane had collapsed when it crash-landed during strong winds.

When the incident occurred, flight TK467 was flying from Istanbul to Odessa, Ukraine.

During heavy crosswinds the Boeing 737 was approaching the runway after having a rough landing it appeared to skid off the runway.