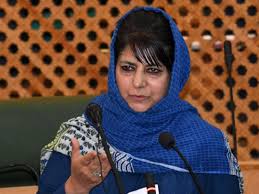 According to the Jammu and Kashmir Chief Minister, Ms Mehbooba Mufti, tourism as a “magical medicine” that can provide a healing touch to the wounds of the people. Speaking in this regard on Wednesday she went on to say that the Valley was safe for all visitors.

A day after reports of tourists being pelted with stones in the Valley, Mehbooba asked people not to fall prey to rumours and said the trouble was the handiwork of “some vested interests”.

“There have been some isolated incidents of tourists getting injured during clashes.

However, projecting them as a deliberate design with malafide intention by a section of the media is regretted and should be condemned. The Valley is safe,” Mehbooba said in an interview here.

“During the process of movement of tourists, there were unfortunate incidents of some tourists caught in a stone-pelting mob situation. There were injuries to our guests. This has been criticised by one and all. Since yesterday, various tourism related organisations have approached me.

Tourism, she said, was the mainstay of Kashmir’s economy.

“The state has gone through an enormous phase of violence. The tourism industry is one magical medicine that can provide a healing touch to the wounds of people. This can benefit an ordinary shikarawala, roadside hawker, small eatery…,” Mehbooba said.

“You see, after many stressful years, we have an opportunity for our common Kashmiri brothers and sisters to earn. No Kashmiri will push away an opportunity to earn his or her livelihood, she said.

The chief minister referred to the recent convention of Travel Agents Association of India (TAAI), held in Kashmir after a gap of three decades and said she had appealed to the members to clear negative perceptions about Jammu and Kashmir in their respective markets.

She also appealed to tourism bodies across the country to partner with the state government’s initiative to help provide a healing touch to the people of the state.
The chief minister said people here had suffered a lot but their hospitality and warmth remains unmatched even in these trying times.