Melbourne welcomes 50000 delegates from across the globe 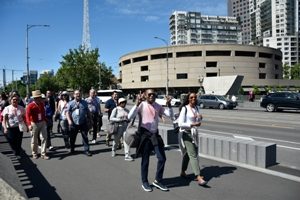 Melbourne and regional Victoria will welcome 50,000 delegates from across the globe as part of The International Convention of Jehovah’s Witnesses 2019, delivering $60.9 million to the Victorian State’s economy.

The massive delegation of Jehovah’s Witnesses from 71 countries will gather in Melbourne at Marvel Stadium, one of Australia’s leading multi-purpose venues, from November 22-24, 2019, filling the iconic sports and entertainment precinct at capacity.

The annual event connects Jehovah’s Witnesses followers to share knowledge and practices through talks, interviews and presentations and will also incorporate one week of touring programs around regional Victoria, which will disperse over 12,400 delegates into Victoria’s most popular regions.

The global event secured by Melbourne Convention Bureau (MCB) with support from the Victorian State Government, City of Melbourne and industry suppliers will see close to 6,000 hotel rooms across 199 properties in Melbourne CBD and Metro areas occupied by the delegation, translating into 35,000 room nights for the state’s economy.

MCB Chief Executive Officer Julia Swanson said that their collaborative approach and strong relationships with accommodation partners enabled them to demonstrate their commitment to this convention and strengthened Melbourne’s reputation as a city that goes above and beyond in delivering successful business events.

As a true convention city, Melbourne was chosen for its progressive outlook as one of the world’s most harmonious, culturally diverse and inclusive host cities. Its ability to deliver large-scale world-class events in a safe, stable and efficient environment ensured Melbourne and regional Victoria the ideal destination to host the meeting.

Not only will the convention take over Melbourne for the three-day event, the pre-convention touring program will drive 12,400 visitors into Victoria’s most popular regional areas including Yarra Valley and Dandenong Ranges, Mornington Peninsula, Geelong and the Bellarine and the Goldfields region, supporting local tourism operators and stimulating local economies.

Ms Swanson said that pre and post conference regional touring options within Victoria were also a significant draw card for this event. There is an abundance of experiences available all within a short drive from the city centre – from coastal attractions, wine and dine experiences to nature and adventure-based activities.

Business events are a major driver of regional visitation. Almost four in every ten international delegates (38%) visited regional Victoria before and/or after the conference they attend last year.