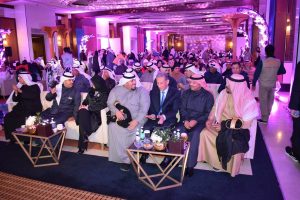 Millennium Hotel and Convention Centre, a five-star hotel and one of the largest convention centres in the area located at the heart of Kuwait hosted the second edition of Testahlon festival. The festival is organized to acknowledge the important accomplishments of the people of Kuwait from multiple fields of work.

Besides paying tribute to individuals having substantial achievements in their respective domains, the festival also celebrates the Kuwaiti traditions. Nearly hundreds of talented individuals who contributed to the prosperity of the country are celebrated through this festival.

The festival, hosted by Millennium Hotel and Convention Centre Kuwait, honoured various stars, prominent sportspersons and celebrities among other this year. Millennium Hotel and Convention Centre organized a gala ceremony and the occasion was graced by the presence of key officials, dignitaries and VIPs from Kuwait. They also organized a cultural programme as a part of the event. School students performed a show of four operas and dance performances influenced by the folklore of Kuwait.

Ahmed Serafi, General Manager, Millennium Hotel and Convention Centre Kuwait, said in a press brief that the hotel is proud to sponsor such a prestigious and thoughtful event. He mentioned that as a leading hospitality provider and once one of the largest convention centres in Kuwait it is their responsibility to support community initiatives that influence growth and honour deserving individuals.

Millennium Hotel and Convention Centre Kuwait has also been awarded by Shiekh Duaij Al Khalifa. General Manager Ahmed Serafi represented the hotel and received the award. The award presented to the property for hosting the event and focusing on shedding light over the role of the private sector in supporting community initiatives.