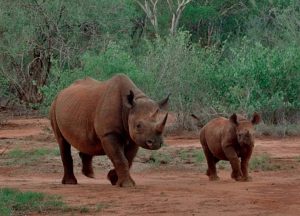 North Tanzania’s Mkomazi National Park is set to become the first wildlife park in Africa specialized for black rhino tourism. The African black rhino is now a rare species and on the verge of extinction. Rhino tourism is expected to begin from July this year. It has been introduced with the aim of adding diversification of tourism and wildlife safaris in Tanzania.

Dr. Allan Kijazi, Conservation Commissioner, TANAPA said in a press statement that a special program has been launched to conserve, protect and breed rhinos in Mkomazi. He informed that the park is running a rhino conservation project for the last 20 years that has attracted the breeding of rhinos. With the new addition, the park aims to make the venue special for tourists.

Nearly US$1.6 million will be spent on the rhino conservation project in Mkomazi. Rhinos will be protected with a fence while tourists can view them more easily than in the wild plains. The black rhino was reintroduced into a heavily-protected and fenced area within the Mkomazi National Park under the Mkomazi Rhino Sanctuary through the George Adamson Wildlife Preservation Trust. The sanctuary is now conserving and breeding more than 12 black rhinos.

Rhino conservation is the key target of the park and conservationists are looking to ensure their survival in Africa after serious poaching which had decimated their numbers in past decades. Black rhinos are among the most poached and endangered animals in East Africa with their population decreasing at an alarming rate.