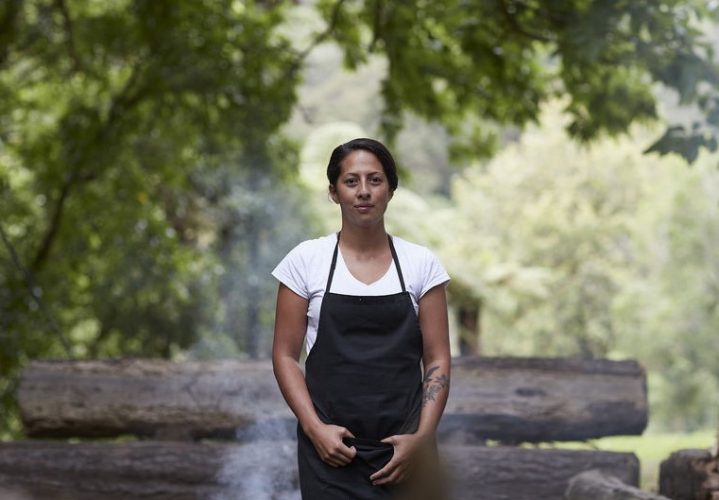 Wellington chef Monique Fiso is an intrepid explorer who loves a challenge. The 31-year-old culinary artist is making a splash on New Zealand’s food scene with her restaurant Hiakai, where she blends fine dining with traditional Māori cooking techniques and ingredients like no one has ever done before.

While many New Zealand tourist activities and accommodations include a hāngi (a meal cooked in a in a pit under the ground) in their Māori culture experiences, these are generally down-to-earth affairs with big slabs of succulent, smoky meat, kumara and vegetables.

Hiakai’s tasting menus of six, eight and 10 courses are a world apart. Each of the exquisitely plated and executed dishes features an indigenous or distinctly ‘Kiwiana’ ingredient that no other fine dining restaurant in the world cooks with.

The daughter of a Māori mother and a Samoan father, Monique grew up in Porirua close to Wellington and developed an interest in food at an early age. “I came from a family where we ate takeout food a lot. My parents were so busy and worked really long hours, and there were five kids in the family,” she remembered in an interview with NZ Life and Leisure.

“I used to go to the school library and read cookbooks as a six-year-old. I’d think, ‘Wow that food looks really nice, I’m sick of eating fish and chips. I wouldn’t mind cooking a lasagne.’ And then it grew into ‘This chocolate soufflé looks awesome’.”

She perfected her craft through sheer determination while working in a series of Michelin star kitchens. She started her foray into fine dining when 18 years old by showing up on the doorstep of Wellington icon Martin Bosley asking for work experience.

With this experience under her belt, she returned from the hectic pace of New York City to New Zealand in 2016 to reinvent her own country’s indigenous cuisine. But where to start if there are no cookbooks, and no shops to buy the ingredients?

Fiso talked to scholars, studied Māori history books and scanned historical accounts of people travelling with Māori for any mention of the food they ate. Then she went foraging to find the ingredients and started to play around with them so she could understand how the ingredients had been used.

“There might be an account that talks about someone using mamaku (New Zealand’s largest tree fern) and saying it was similar to apple, and if they added sugar and wine it would make quite a nice pie,” she told the Goethe Institut.

“So I was taking these tiny snippets from historic accounts and we’d recreate the food to see where they were coming from and we probably wouldn’t end up making a pie but it might end up as pâte de fruits.”

With only some sketchy historical accounts to rely on, she and her team went on to experiment with the ingredients. “Figuring out something that nobody else has been able to figure out is something that I love, and there are a lot of those ingredients on our menu,” she explains.

Hiakai, meaning hungry in Māori, started off as a series of pop up events around the country in 2016. The concept instantly hit a nerve and soon her sold-out events began receiving awards.

“I went into the pop-ups thinking Māori cuisine is a few ingredients, and then there are hāngi, boil-ups and fry bread,” she remembers.

But since then she has learned so much about the ingredients and developed her own take on the cuisine, and these Māori staples have dropped off the menu. “We’re using the ingredients in a much cooler and interesting way,” she explains.

One major challenge in setting up her permanent restaurant which caters to 30 diners was developing supply chains for the rare ingredients. However, after two years of pop-ups that created not only unique dining experiences but also sparked other chefs’ interest in the ingredients, she’s managed to generate enough demand so that growers and producers can deliver.

At Hiakai, Fiso and her staff also celebrate manaakitanga, a Māori word that loosely translates to ‘hospitality’ and share an education with their guests.

“We use a lot of Māori ingredients that a lot of people have never heard of before which led us to creating a glossary at the back of our menu going into detail about the native ingredients that guests are eating,” Fiso explains.

As the dishes are taken out to the diners Fiso and her staff explain their background and the importance of them to New Zealand. “At the Chef’s Counter when we plate each dish we’ll also pull out the native ingredient that relates to it in order to put it in context,” she says.

Often somebody will recognise a plant and be amazed that these are edible and taste delicious.

“I want people to leave thinking, ‘I didn’t realise there was this much to New Zealand food’ and that they’ll walk away from here thinking New Zealand is just as exciting as other countries when it comes to food,” she says.

Opening a restaurant would be an all-encompassing task for many chefs but Fiso last year also starred in Netflix’s international cooking competition The Final Table, helped set up an exhibition at Auckland’s Museum of Transport and Technology and is preparing to release a book about Māori cuisine.