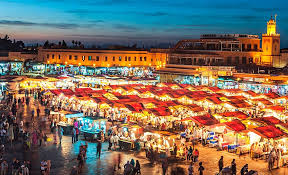 One fourth of Moroccans, 2.5 million, are employed in tourism. The travel and tourism industry of Morocco  generates 11% of Morocco’s GDP, or 15% if indirect contributions from transport or agriculture are added. The share is also higher if the informal sector is taken into account.

Tourism has been a boon to the Moroccan economy for the past decade. Today, it is an industry as important as agriculture or automobile exports

Considered a “development accelerator,” tourism generates income and creates jobs, which helps to reduce inequality between regions. In remote areas, such as the Middle Atlas communities around Ouzoud Falls, tourism is the only source of income aside from agriculture. Tourism is crucial for vulnerable social groups, such as women and young adults, that otherwise may not otherwise be able to secure employment.

In 2019, 12.93 million tourists visited Morocco. Fifty-five percent came from the European Union. This year, the numbers have already started a significant drop,with 100,000 fewer tourists coming to visit Morocco in March. Hotels in Marrakech saw reservations drop by 10,000 in March alone.

Global tourism received the hardest hit due to the COVID-19 pandemic among industries. The United Nations World Tourism Organization (UNWTO) predicted a global drop of 20-30% in the sector throughout 2020. Most of the reduction will be caused by suspensions of international travel, but psychology also plays an important role.

Travel-related anxiety is spreading worldwide. International tourists and expatriates contributed to spreading the coronavirus in the pandemics’ early stages. Contrary to the usual notion of traveling as a pleasant activity and an expression of personal freedom, people worldwide are now concerned about the impact traveling has on both home and destination countries.

The COVID-19 pandemic is an unprecedented event: The first time since the evolution of modern capitalism, the very basis of the global economic system–consumption–came to a near halt. In 2009, a year into the global financial crisis, international tourism dropped only by 9%.

A 20-30% drop in tourism results in financial losses between $300 and $450 billion. Although UNWTO predicts that Europe and Asia will be the hardest-hit regions, Morocco will be strongly affected as well. CFG Bank predicted the number of international tourists to drop by 39%, which translates into at least five million. The bank’s forecast also included a 30% drop in hotel stays.

The fall is mostly attributed to reduced numbers of European visitors. French tourists’ arrivals are expected to halve in 2020, while Italians may stop visiting almost completely. Tourists from other European countries will probably show up in numbers 20% lower than predicted for 2020 in pre-pandemic times.

Reduced numbers of tourist arrivals mean reduced income, which translates into lower investment flow and higher unemployment rates. Losing 30% of international travel, which equals three lost months of traveling, may lead to job reductions reaching 14%, according to WTTC. The estimate is global, and the real job losses will depend on how the economy is structured. In Morocco, the informal sector is robust and a large part of it depends on incoming tourists.

No guests in restaurants or hotels not only means lowered income but also straightforward financial losses related to maintenance costs. The biggest are rent and utilities such as water, electricity, and gas. Some of these expenses are sunk, but some can be reduced by lowering usage or reducing orders.

At the beginning of the lockdown, restaurants, bars and hotel kitchens faced a dilemma, not knowing what would happen to food supplies. With a reduced number of visitors, the already ordered food was at high risk of rotting. As the lockdown continued and restaurants closed, the food supplies were highly diminished, reducing the cost but not generating any profit.

Although tourism will experience the greatest hardship due to COVID-19, it is also an industry with the quickest recovery rate. After the crisis is over, it will take up to ten months for tourism to recover.

Minister of Economy, Finance, and Administrative Reform Mohamed Benchaaboun ensured that “the fundamentals of the national economy are resilient enough to be able to absorb the short-term shocks imposed by the crisis.”

The Moroccan government and various philanthropists have already contributed MAD 35 billion ($3.5 billion) to help mitigate the economic effects of the crisis via King Mohammed VI’s Special Fund for the Management and Response to COVID-19. The measures will extend to support informal sector workers.