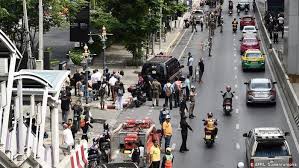 When the world leaders were attending the regional summit a series of bomb blasts rocked Bangkok in several locations today morning.

United States Secretary of State Mike Pompeo and Chinese Foreign Minister Wang Yi were among the ones attending the event.

Four people were left injured and there were rush-hour commuters scrambling. The police believed that homemade bombs were behind the six explosion and the seventh unexploded device was later discovered.

Near the busy BTS Skytrain Chong Nonsi station in central Bangkok before 9 am three small explosive device went off. One explosion was heard in front of the King Power Mahanakhon Building which is near the elevated station and another at a park under the station.

Photos of shattered glass screen at the station and on social media were posted by the commuters.

After the explosion the station closed its Gates 2 and 4 and a spokeswoman for the Erawan Emergenccy Medical Centre said that two of the injured were working at the Mahankhon building.

In the residential area in the city there were explosions too.

Police officer Teerapong Wongratpitak said that residents saw some technical students drop something (before the explosions), so they  chased the lead.

Initially the incident was dismissed by the fruit vendor Balee Inpracon, 23, who was in the area when the bomb went off. He thought nothing serious happened thinking it to be another (electrical ) transformer explosion as it happens a  lot in that area.

At the government in Chaeng Wattana on the outskirts of Bangkok several explosions were heard but nobody was injured.

The police confirmed that they found two fake bombs near the Centara Hotel where the 52nd Asean Foreign Minister’ Meeting and related gathering attended by the world leaders were being held.

So far two men linked with this incident were arrested. In the vicinity of the hotel at the nearby Central World shopping mall security was tightened and visitors’ backpacks were thoroughly checked on Friday.

An investigation has been ordered by the Prime Minister Prayut Chan-o-cha condemning the attacks and urged the public not to panic.

He said that they must must demonstrate their  collective effort to fight against those who intend to harm the country. Let’s not have them stand with us in society.